"Her former classmates remembered her as "lighthearted, loving, and "always laughing and sweet"."

The passing of Laile Vang at the age of 24 during the summer of 2019 will never make sense. It's unfathomable to a community that one of its own could be randomly targeted and her family attacked in the night. This was a young woman who loved to read, played clarinet in the school band, performed with the high school color guard and dance team, and was taking up photography as her life's work.

Two years later, those who knew Laile best are shifting their focus from darkness and pain, to lightness and love. They include Mai and Teng Vang, parents who lost their firstborn child; Allisa Vang, who lost her beloved big sister; and Sherry Jasper, a retired school counselor who lost a student she had welcomed as a first grader at Halmstad Elementary School in Chippewa Falls.

"Our school wanted the best for the Vang family from the beginning," said Jasper, thinking back on all that occurred. "Mai was a champion of her children from the moment we met her!"

When news of the tragedy spread, an outpouring of love and fundraising followed. "We knew the whole family was suffering, not only from the trauma of this terrible thing that happened in their home but also physical injuries," said Sherry. "The whole community was hurting with them and looking for ways to help."

As time went on, Mai and Teng underwent surgeries from injuries suffered in the attack and began the long road to recovery. Laile's sister Allisa, the next oldest daughter in the family, became her parents' personal caretaker and began looking after her younger brothers and sister the same way Laile used to look after all seven of her siblings. Life was returning to whatever "normal" becomes for any family grieving and healing from deep loss.

Then in the spring of 2020, Brenda Fenner, Chippewa Falls High School's dance team coach, presented the Vangs with money from a fundraiser held the previous fall. There had been a moving tribute to Laile during the team's last home show of the season because Laile had been a member during her junior and senior years of high school and choreographed some of their routines. Fenner informed Mai that the event was so successful it would become an annual fundraiser, with proceeds directed to the family.

"We had already paid for the funeral and had everything we needed," Mai said. "I wanted to use it for my daughter. To somehow use Laile's kind heart to make a difference in the world."

Close friends, including Sherry, encouraged Mai to approach the Community Foundation to start a fund in memory of Laile. The vision for the Sharing Love Seedling Fund is to share Laile's love for the cultural arts, as well as her appreciation of Hmong culture and tradition.

Allisa said she still struggles with accepting that her sister is gone, but believes the new fund is a fitting way to honor Laile's memory.

"It's who she was as a human being. I want her name and her love to be alive," she said. "I think she would be very proud of this." 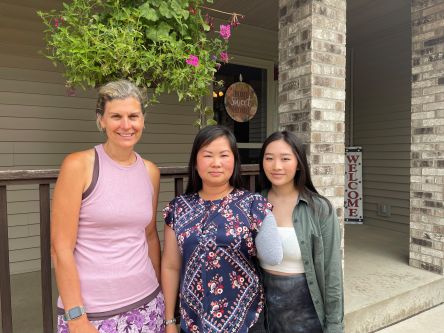 Established to Honor Laile Vang and to "Share Her Love".